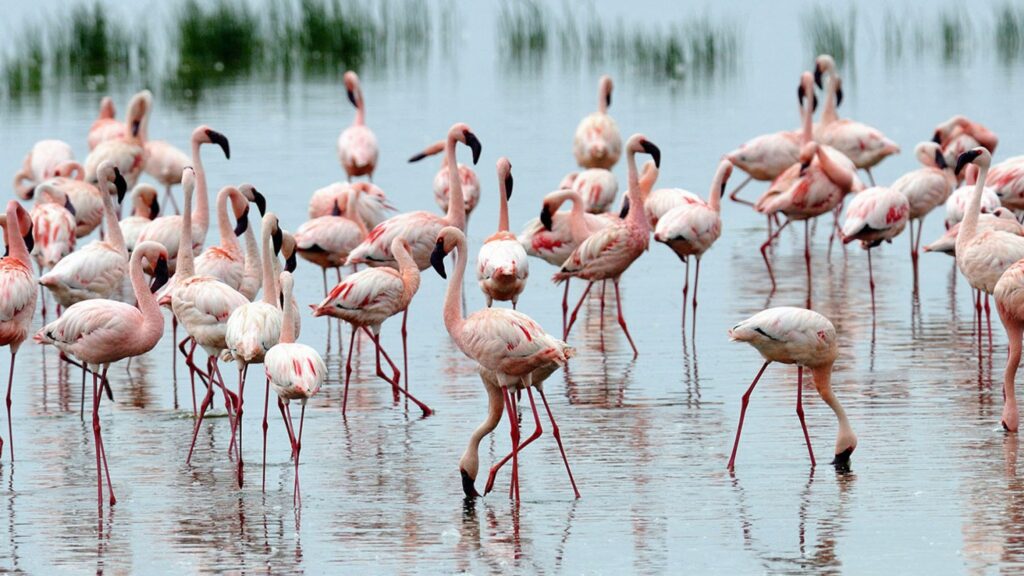 Lake Nakuru National Park was established in 1961. It now covers an area of 180km² (69.5 square miles) and is situated in the Great Rift Valley – 156km northwest of Nairobi in the Nakuru district of the Rift Valley Province. The park is managed by the Kenya Wildlife Service.

It is renowned as a bird sanctuary with over 400 bird species, including huge flocks of flamingoes and many other water birds. It is an excellent park for wildlife spotting and is home to many water-loving animals such as hippos and waterbucks.

A safari to Lake Nakuru National Park can be completed in one day or combined with a visit to Lake Naivasha and the nearby Aberdare National Park.
Lake Nakuru is a large, shallow lake surrounded by marshes, woodland and grassland. There are some rocky outcrops and the largest euphorbia forest in Africa on the eastern side. The lake is fed by three main rivers; the Njoro, the Makalia and the Enderit rivers, as well as several springs. The park has very good roads and some excellent viewpoints overlooking the lake from Baboon Cliff and Lion Hill.

Best time to visit Lake Nakuru park
The best months to visit are June to September and January to March. However the rainy seasons are generally not as wet as other areas and the roads are good year-round.

The climate around the lake ranges from cool to hot and humid. The annual rainfall is 965mm which is lower than many other parts of Kenya. The wettest months are March to May and October to December, but even at these times it is not as rainy as other areas.

Bird watching: Enjoy the fabulous water birds and other bird species. The best place to view the birds is from Baboon Cliff, where you get an excellent view over the lake, and the wonderful spectacle of pink flamingoes along its edge. However, the number of birds in the park fluctuates as food conditions change, so check the bird population with the national park before making the journey.

Drive through the unique vegetation and the biggest euphorbia forest in Africa.

Viewpoints include Lion Hill, Baboon Cliff and Out of Africa.

Visit the beautiful waterfall at Makalia.