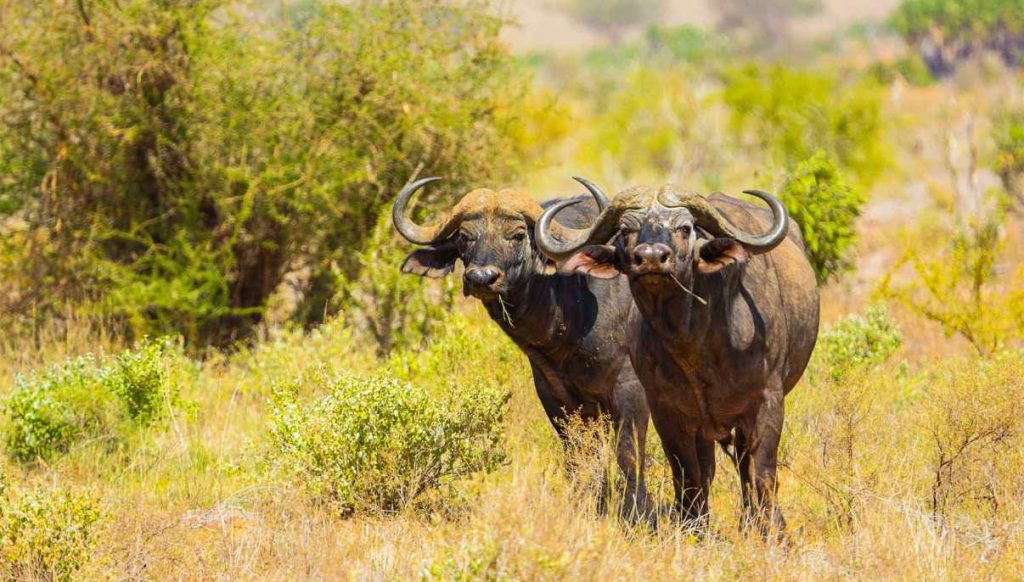 Tsavo west national park is absolutely rich in bio diversity which can be spotted in savannah ecosystem comprised of Acacia woodland, open savannah, scrubland, belts of riverine vegetation and rocky ridges like the poacher’s look out where guests can sightsee the teeming herds in the open plains below. Some of wildlife species to be spotted in the park include Cape buffaloes, Eastern black rhinoceros, hippopotamus, elephants, leopards, lions plus other smaller animals like bush baby, lesser kudu, hartebeest and Masaya giraffe and variety of bird life can be seen in here.

The sight of dust-red elephant wallowing, rolling and spraying each other with the midnight blue waters of palm-shaded Galana River is one of the most evocative images in Africa. This, along with the 300 kilomtere long Yatta Plateau, the longest lava flow in the world, make for an adventure unlike any other in the Tsavo East. The park forms the largest protected area in Kenya and is home to most of the larger mammals, vast herds of dust –red elephant, Rhino, buffalo, lion, leopard, pods of hippo, crocodile, waterbucks, lesser Kudu, gerenuk and the prolific bird life features 500 recorded species.

When to visit Tsavo

Tsavo park is visited all year around but the best time for game viewing is during dry seasons which starts from December to Mid- March and June to October when the park is dry. Birding is best enjoyed in wet season when the migratory birds have arrived in the park which starts from April to June and October to November.

Visitors to Tsavo East can expect a hot, dry climate. The average temperature fluctuates between 31°C/88°F during the day and 20°C/68°F at nighttime. Rainfall peaks in April and November during the long and short rains, respectively. Rain tends to fall as short heavy showers.

Tsavo West NP has a climate characterized by hot and dry conditions. During the day, expect temperatures around 29°C/84°F, while 18°C/64°F is typical at night. Cool mornings mean warm clothing is a good idea for early game drives. Rainfall peaks in April and November.